Origin of The Trophy 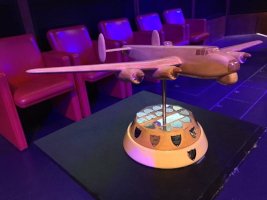 The Shackleton Trophy is awarded annually for the Air Training Corps (ATC) expedition judged to be the most successful, imaginative and adventurous over the previous 12 months.  It’s originator was Jim Crail, a previous Chairman of the Shackleton Association who, through the trophy, thought to link the quality of endurance implicit in the aircraft’s name and operations with that demanded from each ATC expedition and representing the Corps motto ‘Venture Adventure’.

The trophy has been awarded to some 27 expeditions to date including those to Canada, Iceland, East Africa, Swaziland and Nicaragua. It continues to inspire a sense of adventure and exploration amongst our cadets and promotes a greater understanding of global society, social responsibility and the environment.

Currently on display at the RAF Club due to the kind support of the Club, the Trophy is the property of Headquarters RAF Air Cadets, RAF Cranwell.

The 2019 winners of the Shackleton Trophy were the Bristol & Gloucestershire Wing for their expedition “Exercise Mountain Storm” set around Banff, Canada.

To see more photos of this event view the photo album.