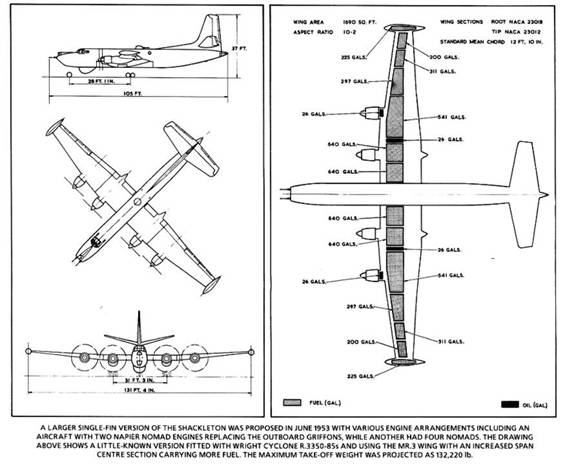 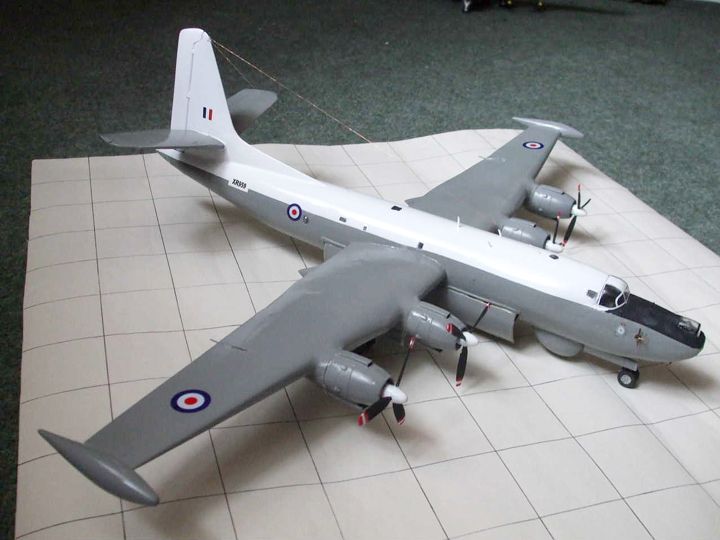 As a 17 year-old in 1959 I flew in Shackleton MR2, WR959 of 42 Squadron, out of RAF St.Mawgan, on a Long Range Operational Flying Exercise. A description of this flight appears in Issue 92 of The Growler (The Shackleton Association magazine). The memory of that flight is as fresh today as it was then and resulted firstly in researching and building a model of that aircraft precisely as it was at the time and secondly in my ultimately becoming Archivist for the Association. The archive is full of gems!

Among the gems is quite a lot about a projected Shackleton MR 4 and also an Avro commemorative brochure with an artist impression of the aircraft and a three-view drawing. This drawing also appears on the Avro Shackleton website and in slightly more precise form in the Chris Ashworth book The Avro Maritime Heavyweight

There is a saying amongst engineers which goes If it looks right it is right!. The MR 4 looks completely right! So much so that I wanted to see just how it would look in the flesh.

But the MR 4 is very different from all of the previous marks. In fact, although its lineage can be easily discerned it is almost a completely new aircraft. Yet one linked umbilically to the Shackleton and its history.

The dimensions of span, length and height are quite significantly larger, and the twin rudders have disappeared. But the outer section of the wing and the unique nose are both obviously MR3. The pedigree goes deeper in that although the new fuselage is circular it was to have been made using the formers from the ill-fated Avro Tudor airliner, the one, in fact, in which Roy Chadwick was lost on a test flight.

In trying to build the MR 4 the experience gained in building the MR 2 proved invaluable. I knew every single mistake that I had made and although the finished model looked superficially convincing there are significant errors. Some from the very basic vacuum form kit and some from my own limitations. But the MR 4 was to be an altogether more challenging proposition in that not even a basic kit exists.

But the first decision was what version of the MR 4 was I going to build? There is in the literature a lot more description of its proposed and partially developed Napier Nomad engine than there is of the MR 4 itself. But thinking about it I felt that, no matter how good this engine may potentially have been, it was itself a completely unknown quantity. Even more so than the aircraft! I formed the opinion that frustrations with the engine and its extended development time were probably contributing factors to the RAF not taking the MR 4 seriously.

Therefore I concluded that if the MR 4 had been built the most probable and logical version would have been with four Wright Duplex Turbo Cyclone engines. Originally this engine had also not been without its problems but the substitution of fuel injection for carburettors and improved air-flow for cylinder cooling had resulted in a very powerful yet reliable motor, which is a pre-requisite for a maritime aircraft.

So the decision was made. It would be the MR 4 as on the web-site and in the Chris Ashworth book. This was to be just the beginning.

Firstly several copies were made of the drawing and a scale established which it turned out to be about 1/250. Not only was this tiny but almost every model I have ever made is to 1/72 which somehow seems to give the right final proportions and detail for a model. But where to find the basics? The original Shackleton had a nominally rectangular fuselage but on the MR 4 this had become circular, and the original engines had been in-line V-12 Griffons and I was proposing 2-row 18-cylinder Cyclone radials.

Back to the plan. The Cyclone engines were used in many aircraft so there should be little problem in finding them but would they fit the Griffon nacelles and although the new fuselage was nominally circular, instead of being nicely symmetrical tapering to the tail like the Avro Tudor airliner that of the MR 4 sweeps sharply upwards to the tail cone. I had actually lain in that tail-cone on the MR 2!

The internet is fantastic and soon a three-view plan of the Tudor presented itself. And the engines and therefore their local nacelles were soon found on the Lockheed Constellation of exactly the same era. Pictures of a Canadair Argus also gave details of the ASV 21 radome. But having three differing plans of a fuselage of three alternative aircraft and actually building the MR 4 were very different things. But at least the tail did look a bit like a Lockheed Orion. Then what about the wings themselves now over 131 ft compared with 120 ft on the MR3?

But patience in comparing the various plans produced the first lucky coincidence. The Avro Tudor, the Lockheed Constellation and the Orion all turned out to have cylindrical fuselages of approximately the same diameter. But whereas the Constellation and Orion were low-wing aircraft, the Shackleton was to be a mid-wing aircraft and the Orion only had a tiny bomb-bay. I took it one step at a time. I overlaid the plans of the Orion against the MR 4 and although the Orion was much longer and included a MAD boom the diameter was right and the sweep up to the tail very similar.

For the wings, at least the basic Shackleton wing from the original MR 2/3 model would give me the outer, dihedral element and also the aerofoil depth and shape

So it looked as if a Shackleton MR 4 could at least be a possibility using the basics from probably three other aircraft. I will not go into detail about finding only 2 out of the 3 being easy, suffice to say that all three, the Shackleton MR 3, Lockheed Constellation and Lockheed Orion ultimately came through the door.

But as can be imagined the fun had only just started and eventually led through all the machinations which would have confronted Avro themselves. The Orion fuselage was cut into three pieces either side of what would become the huge Shackleton bomb-bay which was really the only truly parallel section, but this was complicated by the Orion being low-wing. Luckily, as we had already found, the Constellation fuselage was the same diameter so that the top section of the Constellation became the bomb doors of the Shackleton! A piece was then lopped off the up-swept end of the Orion and heat-formed to match the MR 4 rear fuselage. The fin, rudder and tailplane were drawn out to scale on squared paper and the fin made from layers of polystyrene while the tailplane was constructed using the Constellation's wing-tips!

Then came probably the most challenging part of all, blending the new cylindrical fuselage to the rectangular nose of the Shackleton. It was done the same way that Avro would have done it by constructing ribs from what is known to model-makers as polystyrene card of steadily blending section, then cutting away the circular skin of the fuselage and scratch-building the replacement shape also from polystyrene card. The extended inner, parallel sections of the wings were constructed in the same way. The rear section of the Griffon engine nacelles and wheel bays DID match precisely the diameter of the Cyclones from the Constellation. So Avro COULD have done it!

Now to join the wings to the fuselage. The basic main-spars came from model-making extruded box-section and were assembled as part of the centre fuselage as all Roy Chadwick designs, while the ribs of the wing inner and outer sections were cut precisely to take these spars. The whole trailing edges were cut off and substituted. All this not only gave structural strength but also allowed the outer wing dihedral and MR 3 outline to be precisely achieved. The bomb-bay was then built as nearly as possible to the Shackleton using model structural I-section beams. Then bombed-up with a combination of what is nicely called stores, depth-charges and homing torpedoes. Amazingly all of these structural modelling supplies could be found just up the road at Frome Model Centre of which there can be few like it in the whole country.

So this gave the basic aircraft structure but as anyone knows who has built a house, it is the details which really take the time. Sanding alone took days! To keep this description as brief as possible I decided that the colour scheme at that time would probably have been the same as eventually appeared on the Nimrod MR 1, namely white tops above dove-grey.

The roundels and fin flashes turned out to be really easily obtained from a specialist supplier, Fantasy Print Shop in Bodmin, but in building the MR 2 I had started to learn how to make my own decals (transfers). But even if I could make them what serial number could I use? I played around with lots of clever ideas using combinations like 6T5 but none of them really looked like a true RAF serial. In 1959 I had flown in WR 959 - what about being really cheeky and trying to use a real serial number like XR 959?

XR would have been about the right period but obviously whatever real RAF serial I used would give me a problem since it could be identified with an actual aircraft which, by definition, could not be a Shackleton MR 4. Once again luck was on my side in that as far as I can establish XR959 was never used and so we now have not only an accurate replica of a Shackleton MR 4 as it was planned but even the serial number is appropriate too.

Perhaps it had been reserved for a Shackleton MR 4!